Vegan Bake Sale in Berlin 3rd, 4th and 5th of May

Next week I’m taking part in the Vegan Bake Sale ! All proceeds will go to the amazing Animal Equality organisation. If you’re in Berlin and fancy a piece of cake, while also doing something good for the animals, come along!

The Vegan Bake Sale will take place inside my parents bookshop Buchhandlung Thaer in Friedenau.

Hope to see you there!

Brammibal’s Donuts at the Maybachufer in Kreuzberg

When I became a vegan a decade ago, I never thought I’d ever see a fully vegan donuts place in Berlin! So when Brammibal’s Donuts started their kickstarter to open  such a place, I immediately donated even though I was never a big donut fan. Sadly they didn’t get enough money and so I never got to enjoy my perk of getting a free donut on the regular…

Thankfully in 2016 they managed to open up their café anyway. And it’s safe to say, that it’s become very popular! On sundays they are so overcrowded that you can forget about sitting down (there’s 40 spaces inside and 15 outside) and you’ll have to wait in a long line to buy donuts to-go. I’d suggest going during the week or/and very early. Sometimes they run out of donuts before closing, which they always announce on their instagram page so make sure to check before you go in the middle of the day.

They offer a variety of donuts like salted caramel, matcha, strawberry cream cheese, espresso, maple coconut bacon, blueberry coconut, rosemary and have a changing selection of seasonal options, too. When I first tried them, I was actually a bit disappointed because I found them too dry, but the last two times this hasn’t been the case and they were soft and doughy. However the best donuts are the filled ones and the ones coated in chocolate. I think they need something to contrast the dough, otherwise they taste a bit boring to me. So unless you are an absolute donut minimalist, maybe don’t try the basic cinnamon-sugar one first. Also make sure to eat them as soon as possible and not carry them around for too long, as they tend to dry out/harden quickly.

Just in case anyone is unclear about this: these donuts are just as decadent and unhealthy as the real non-vegan deal, which is exactly what I’d hoped for. They’r really rich and filling and worth their price – 2,50 € for one, a box of 12 for 24 €.

Alongside the donuts you can buy lots of coffee specialities made from ethically sourced coffee and other hot and cold drinks. There’s also some savory food on the menu like bagels or a breakfast platter with bread, bakes beans, tempeh and avocado, which is tasty but a bit on the pricy side. You can certainly get a tasty breakfast or lunch here, but the main attraction is definitely round and fried. 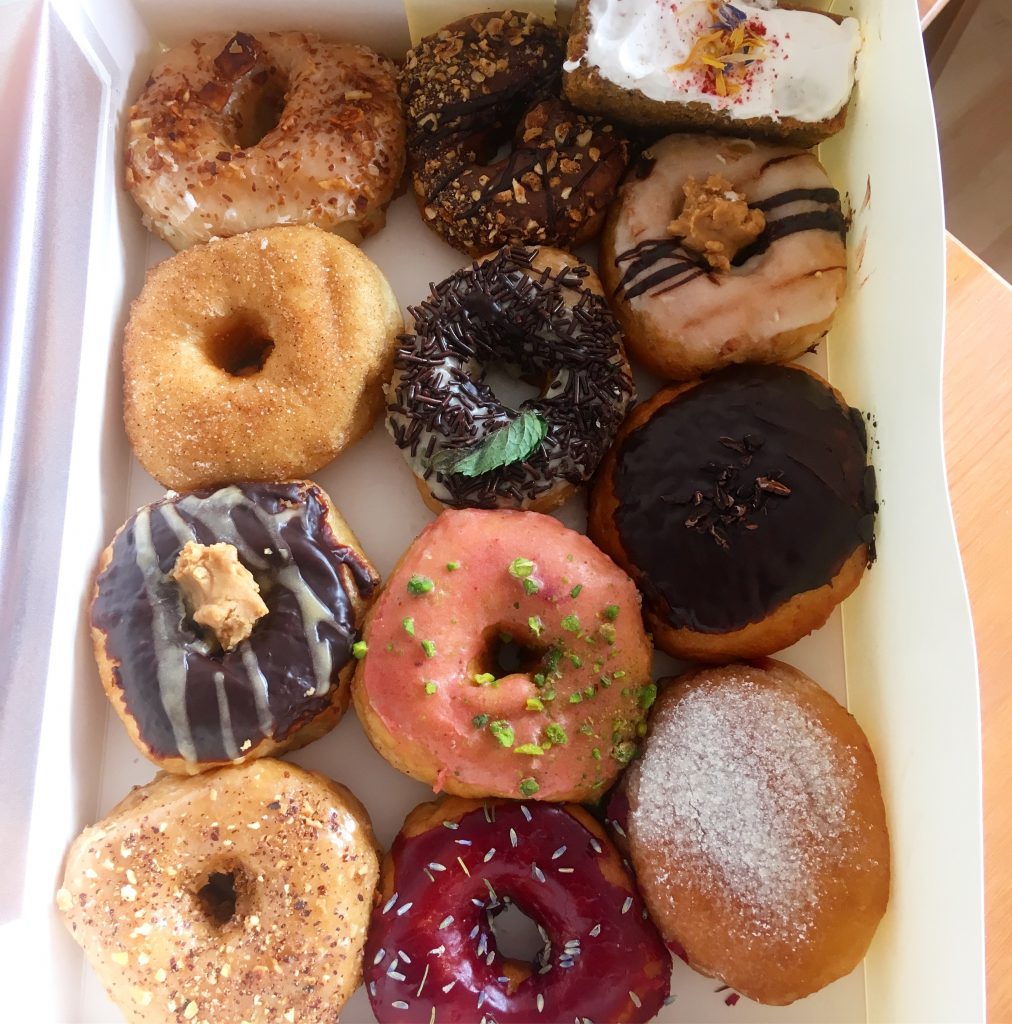 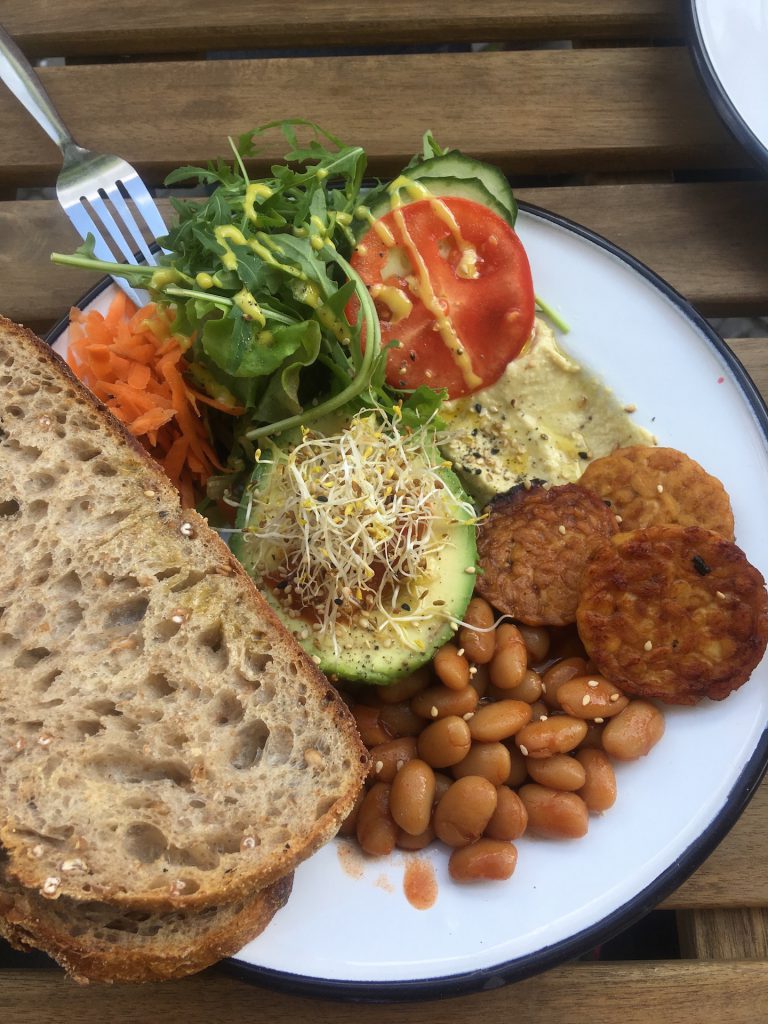 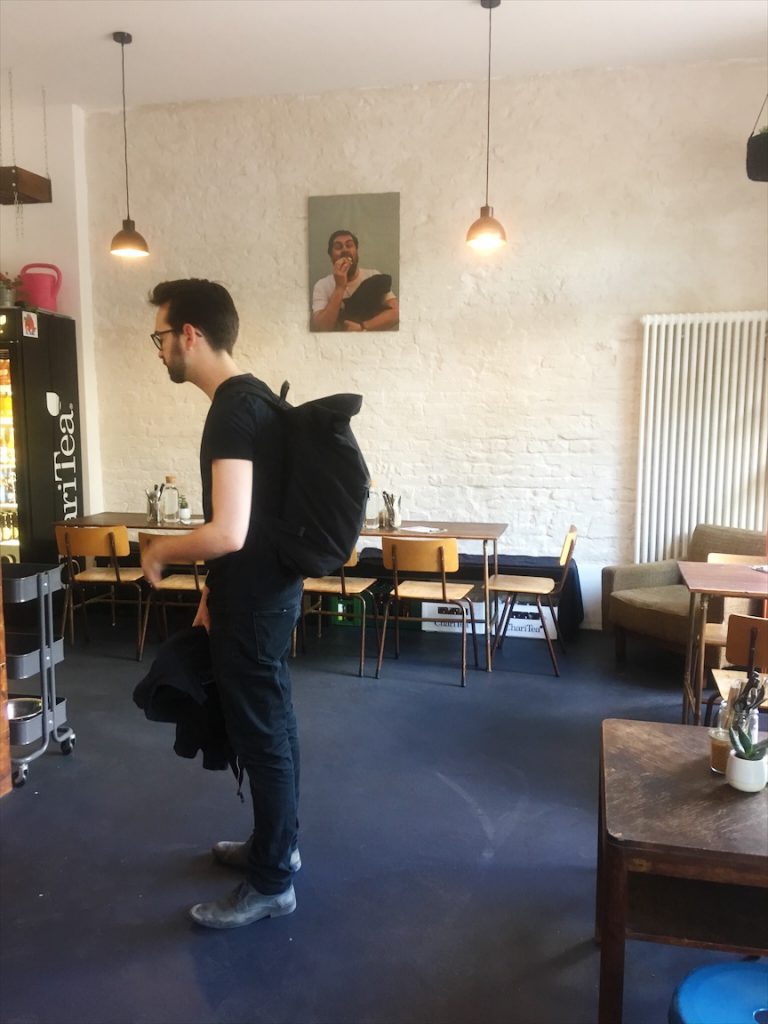 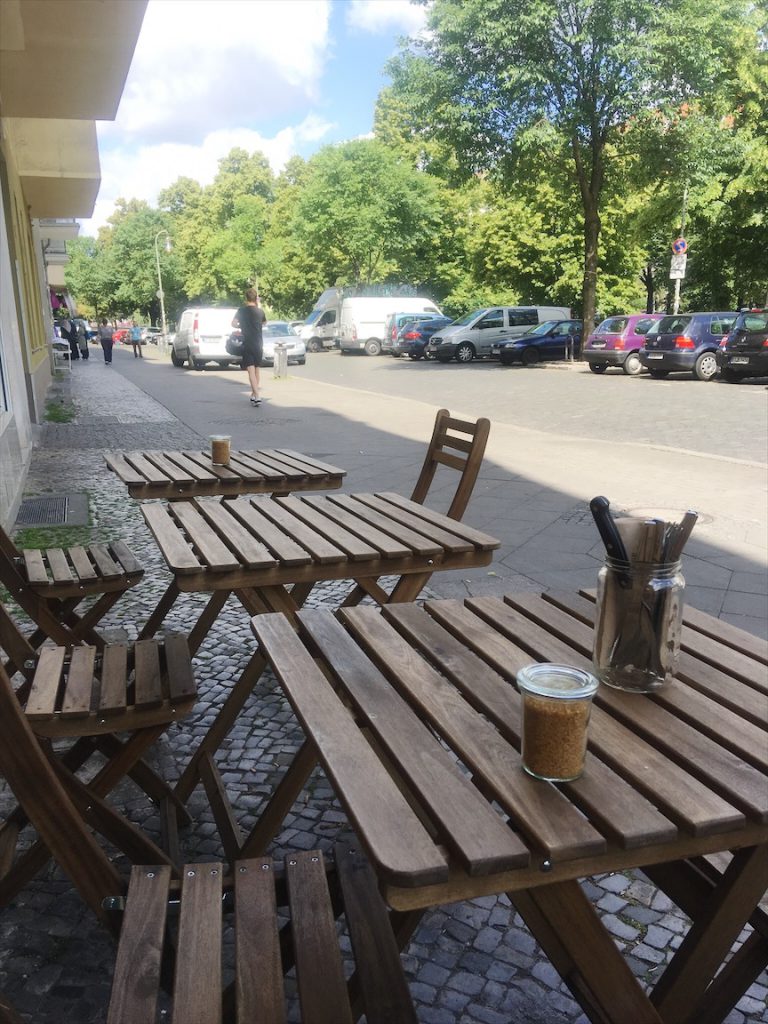 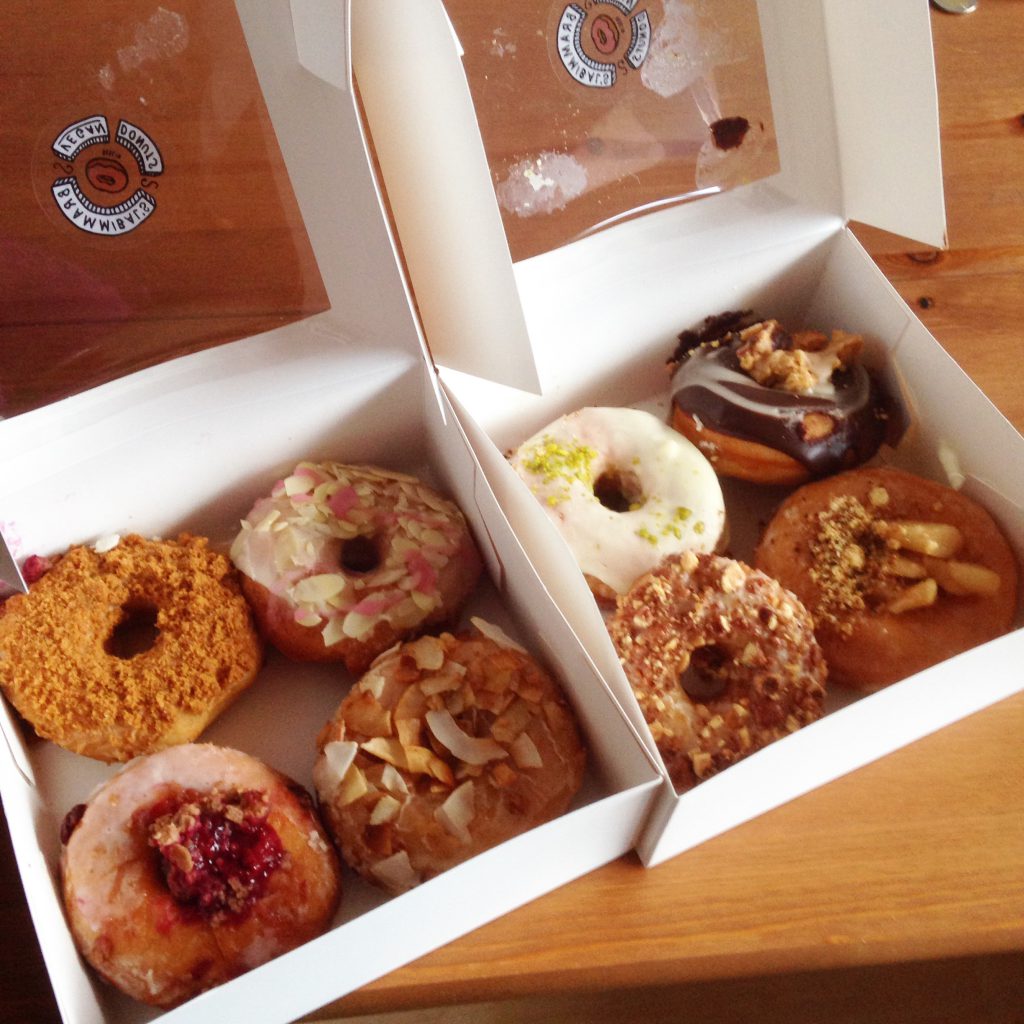 “No milk today” is a nice comfy Café in Kreuzberg, near Südstern with funky retro furniture on the inside and some tables outside on a balcony. Everything is wheelchair-accessible.

The savory menu is limited to soup (4,70 Euros), Salad (6,90), Quiche (4,20) and Bagels (4,50), as well as some breakfast options like scrambled tofu. The main offerings are a changing selection of cakes and other baked goods, some of which are glutenfree or soyfree.

I wouldn’t  necessarily recommend this place if you’re feeling very hungry as the portions tend to be small and it is not very cheap. It’s however a great place to meet up for a coffee (or chai or matcha latte!) & a piece of cake, as well as if you’re feeling peckish. I also liked working on my laptop there when I used to live nearby, especially in the backroom where it tends to be quieter. 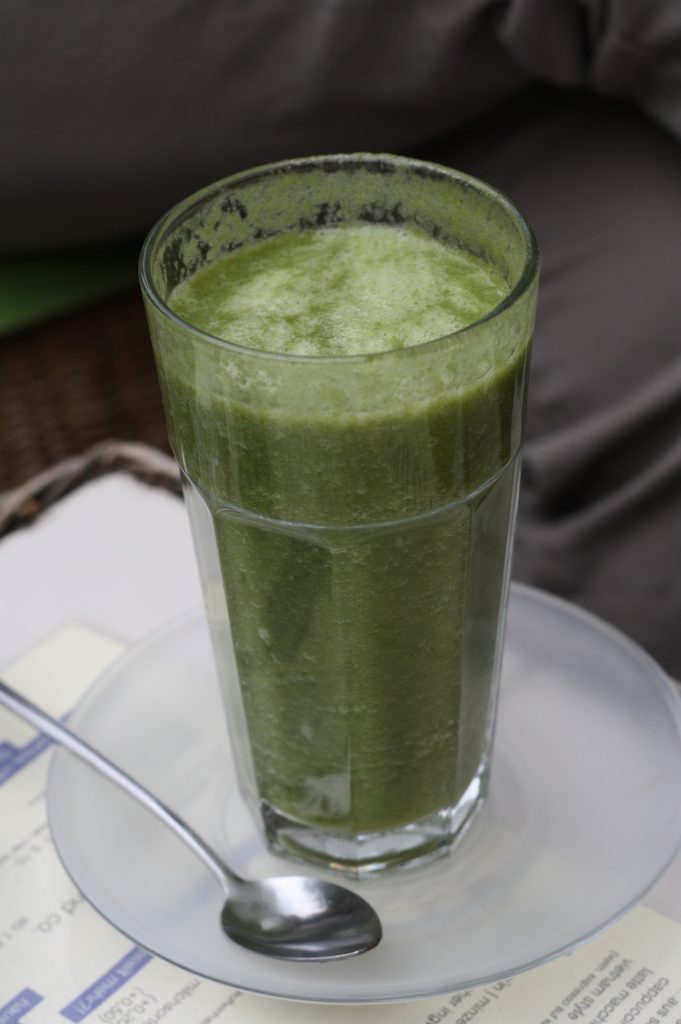 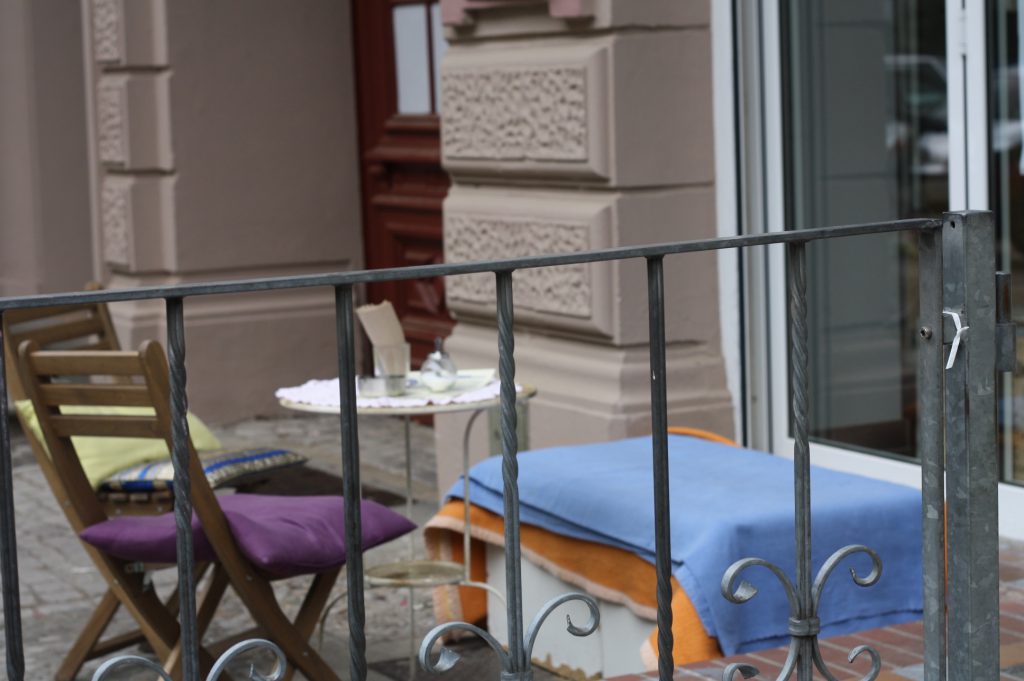 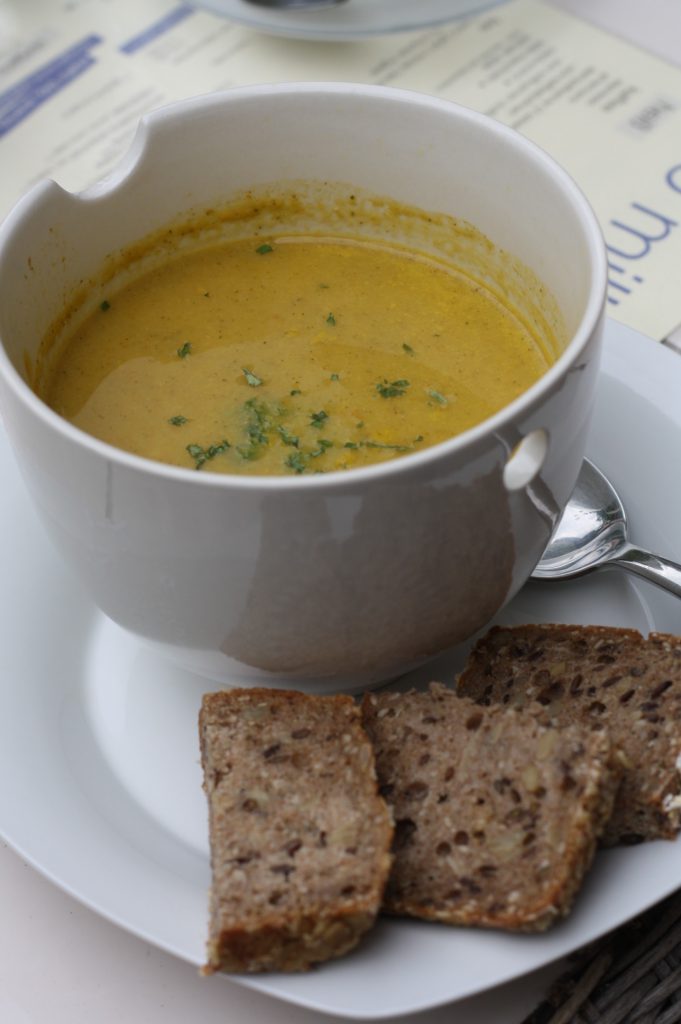 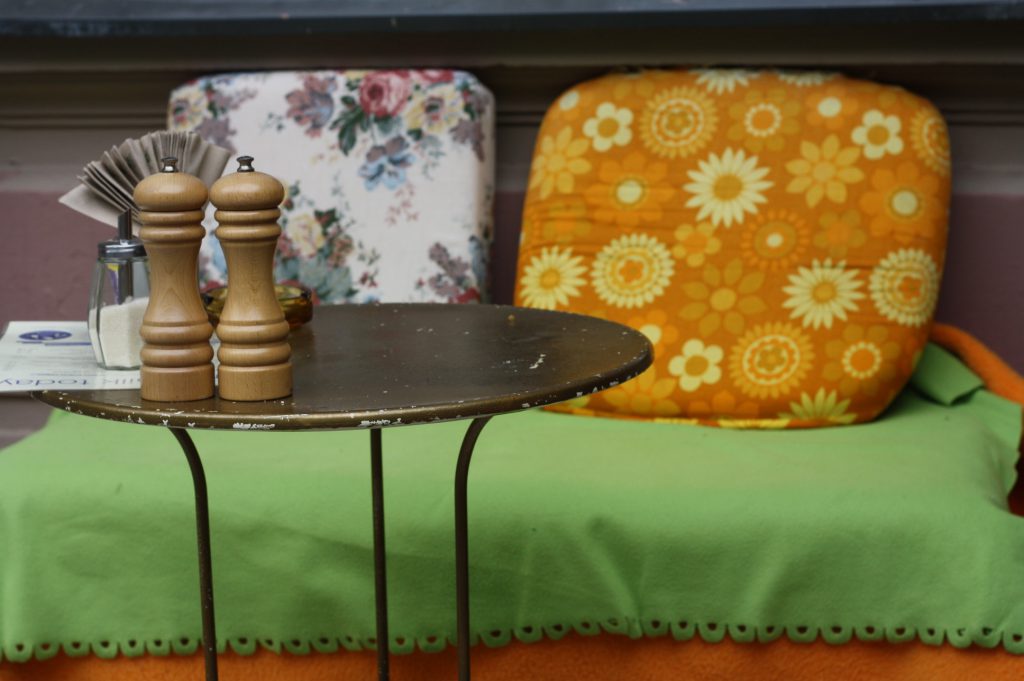 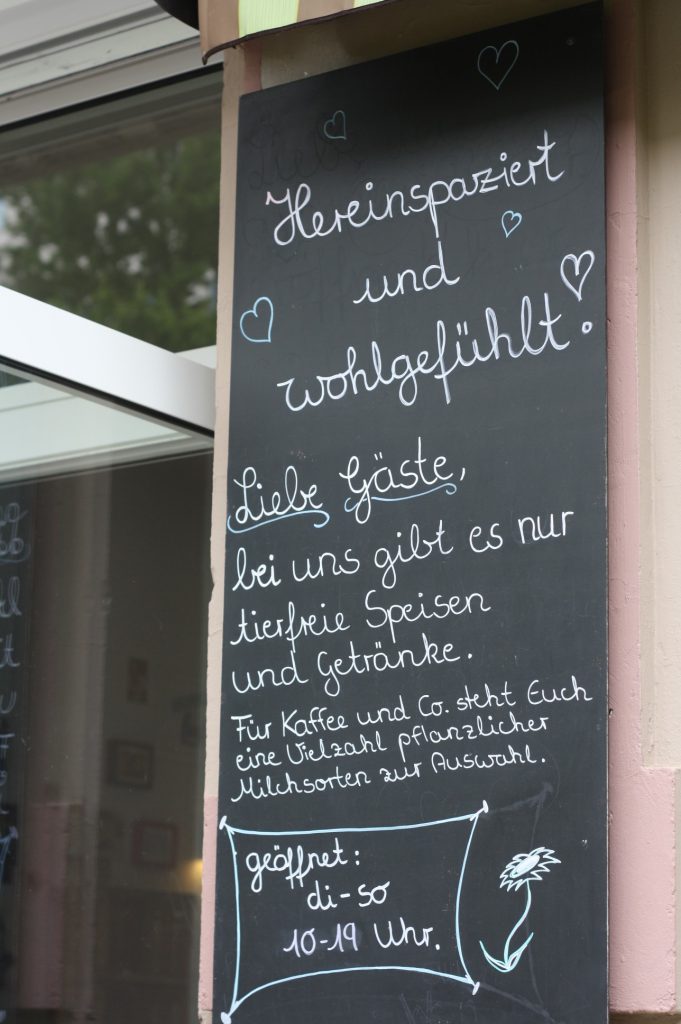 Momos, Tibetan/Nepali dumplings, are one of my absolute favourite foods! How lucky am I to live in a city that is dedicated 100% to vegetarian momos then? And why have I only been there twice so far? Well, actually, this one I can answer. I went there a few years ago, when it was still in another location, and was really underwhelmed. I stumbled upon it again a few weeks ago and was really pleasantly surprised. I don’t know if they changed their recipe or we just had bad luck back then. Either way I’m really happy I  accidentally gave them a second chance.

The momos were good, the pumpkin-chickpea filling was fine but the broccoli-shiitake-tofu one was even better. I went with a simple soy sauce so it wouldn’t overpower the taste of the momos. One downfall of this place is that the momos aren’t served in a steamer, so when you get the steamed momos they start to become less soft the moment you get them. I might try the fried version next time to avoid dry momos. There’s also sweet momos on the menu which I definitely want to try, too. As well as the momo soup. If you don’t like dumplings, there are some sides – edamame, raddish roots, green beans, crunchy sprouts – but a) this probably isn’t your place and b) how can anyone not like dumplings?!  I’ll definitely be back. 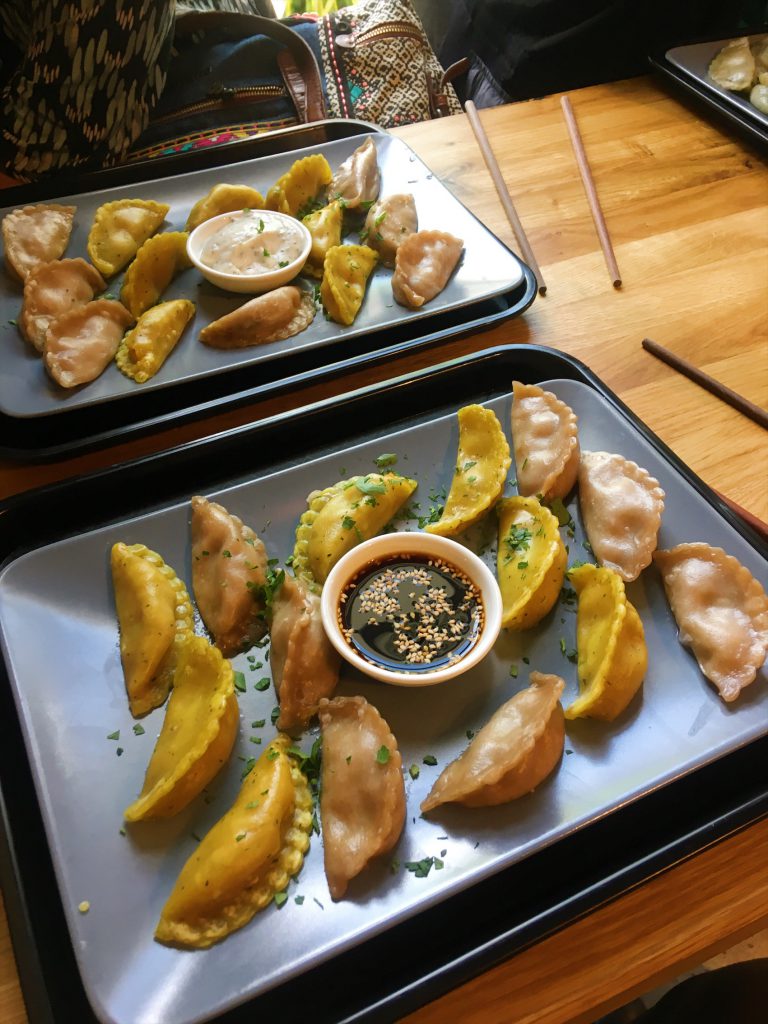 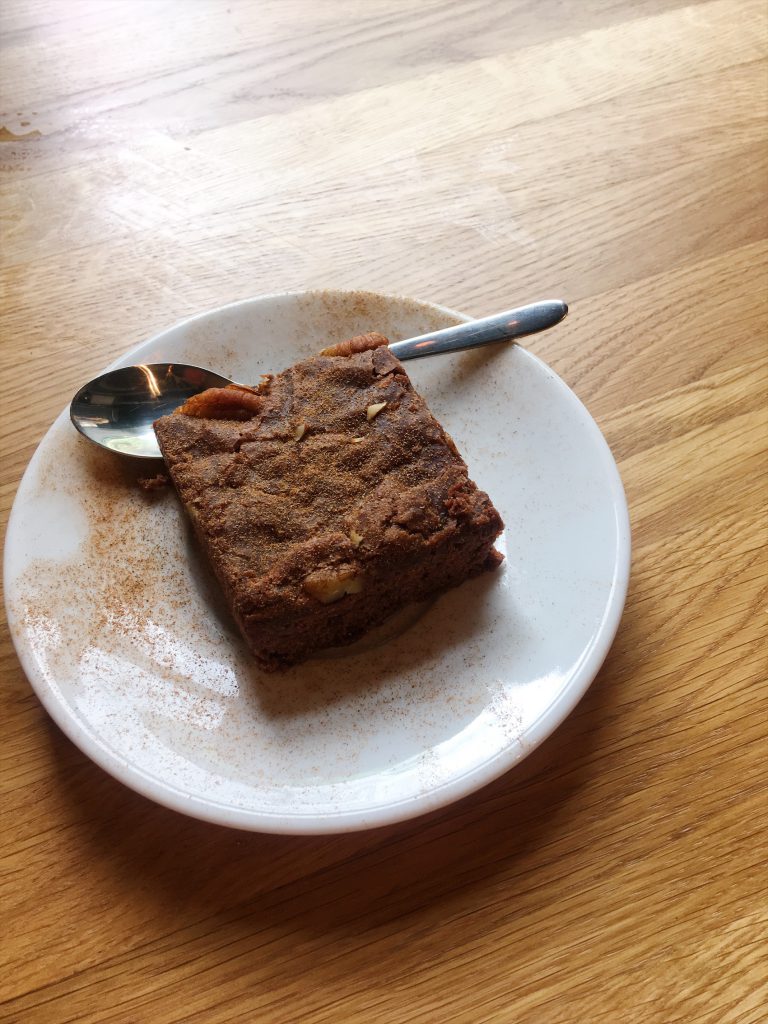 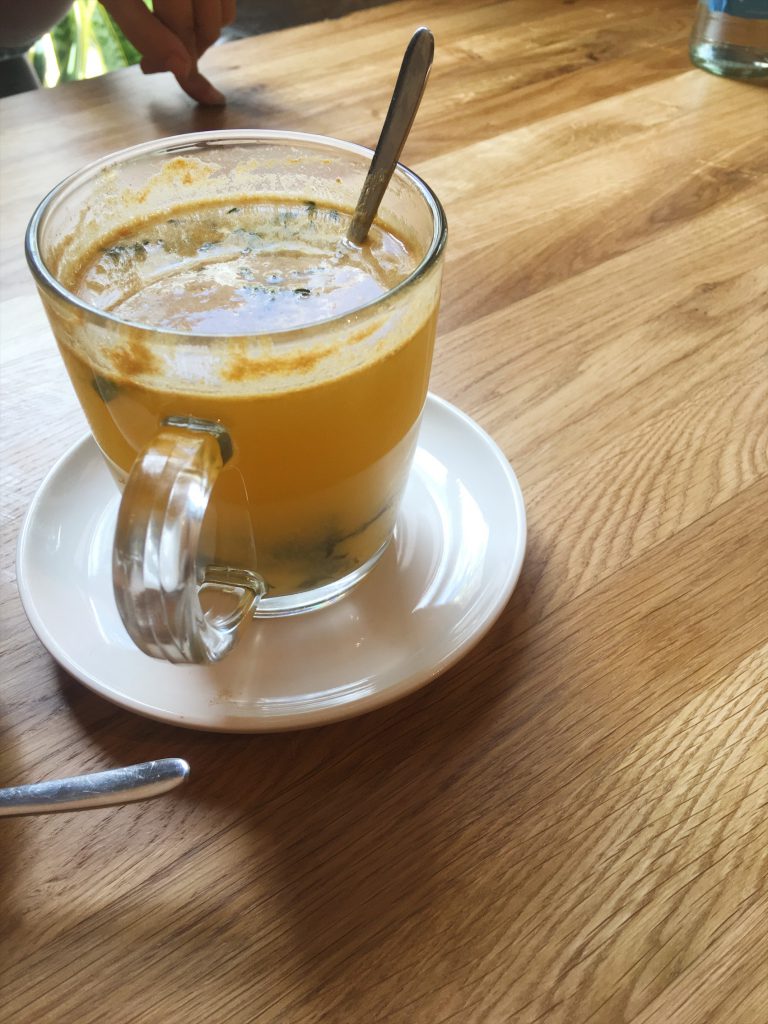 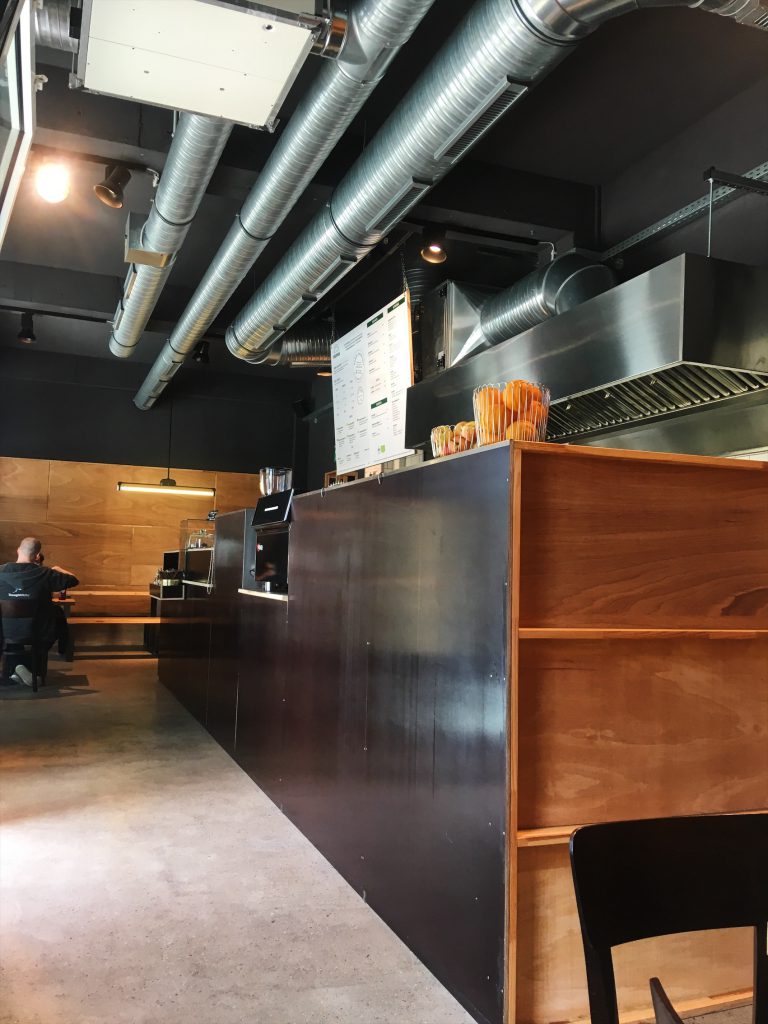 At the moment there are three vegetarian “Goodies” cafés in Berlin.  The three vegan ones near the Veganz supermarket may still carry that name but are run by Veganz now. On the Veganz website it sounds like they’re still run by Goodies, but Goodies says that is not the case and they actually seem a bit upset about Veganz still using their name (“eventhough they are still using our name it’s not goodies anymore!!!”).

The three outlets are in Friedrichshain (Warschauer Str. 69), in Zehlendorf right near the Schlachtensee Lake (Breisgauer Straße 2a) and in Steglitz (Schloßstraße 78–82). I’ve been to the one Friedrichshain once years ago and I’ve never been to the Schlachtensee one but I’m a rather frequent visitor of the one in Steglitz. There aren’t many vegan options in Steglitz but my main reason for visiting this place a lot is because it’s right in the middle of a big Globetrotter, an outdoor shop – actually, I looked it up, it’s Europe’s biggest outdoor chain. While a café inside a store might not sound so comfy, I actually think it’s pretty cute there and also not a bad place to get a bit of work on your laptop done for a few hours.

You can see their German sample menu with pictures here but they don’t have everything. About half of the food is vegan and you can get all their coffees and shakes with soy milk, almond milk and sometimes coconut-rice milk, too. In the winter they also serve Spekulatius Latte, Maple Cinnamon Latte und Bullet Proof Latte (with coconut oil… which… no, thank you). Sometimes they have good raw Kombucha in the fridge. They always have a selection of cold salads to-go, which are overpriced but mostly tasty, several sandwiches and some cakes and other baked or raw sweet goods. I like their Chai lattes and Matcha lattes, their bagels with egg salad and the changing selection of soup they sell. The soup is also the cheapest way to get full there, you pay 4,90 euros for a big bowl and a slice of bread. I couldn’t even finish the pumpkin-coconut one with ginger because it was so rich. They used to have a great “OMG Chia Pudding” but I haven’t seen in there in a while. There’s always a jug of mint or orange infused water standing around, if you don’t feel like paying for a smoothie or a hot or iced drink.

Goodies cafés are definitely not must-go places  but I like them and they’re a nice option to have, especially because two of them are in areas that aren’t that vegan-friendly. 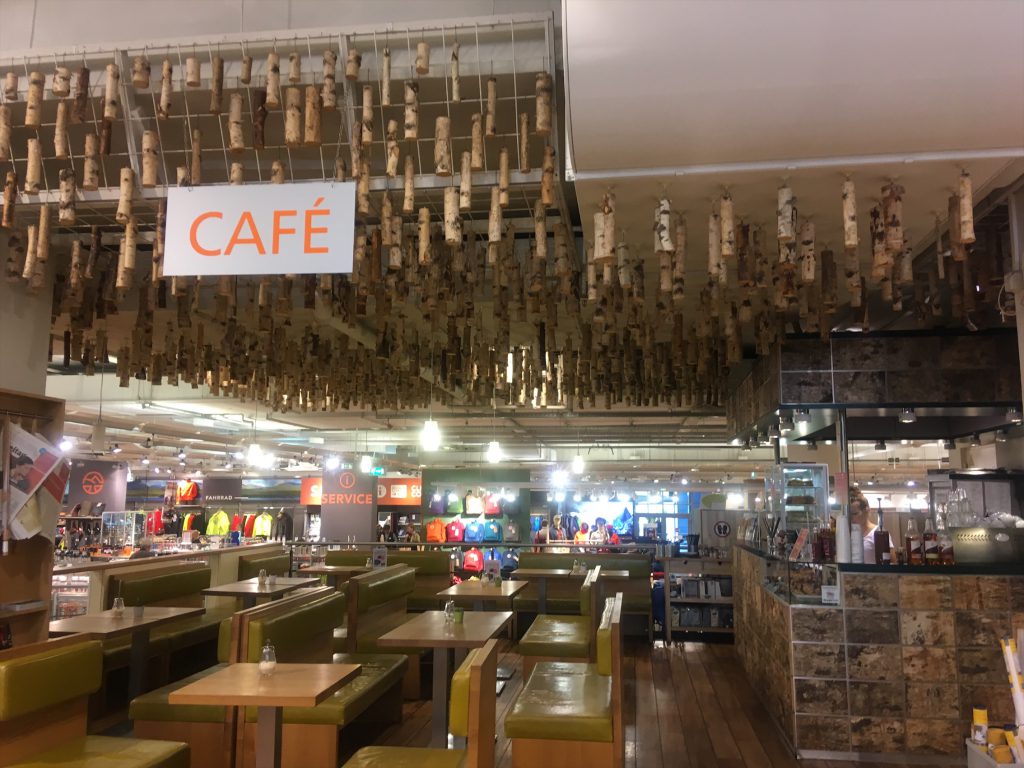 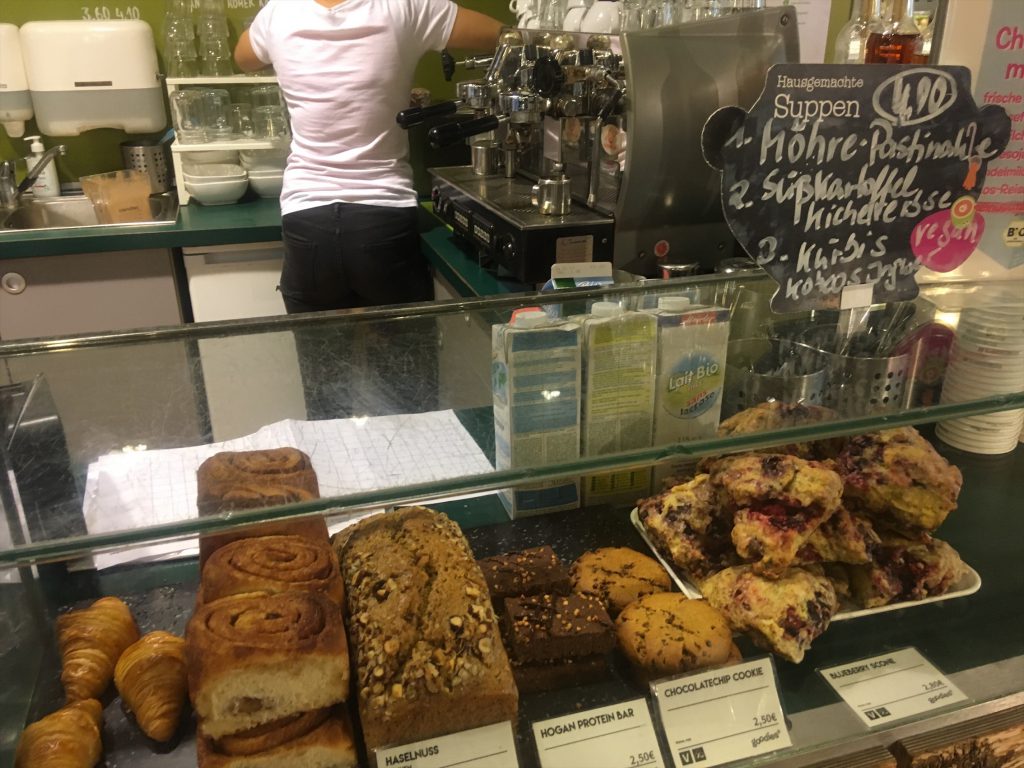 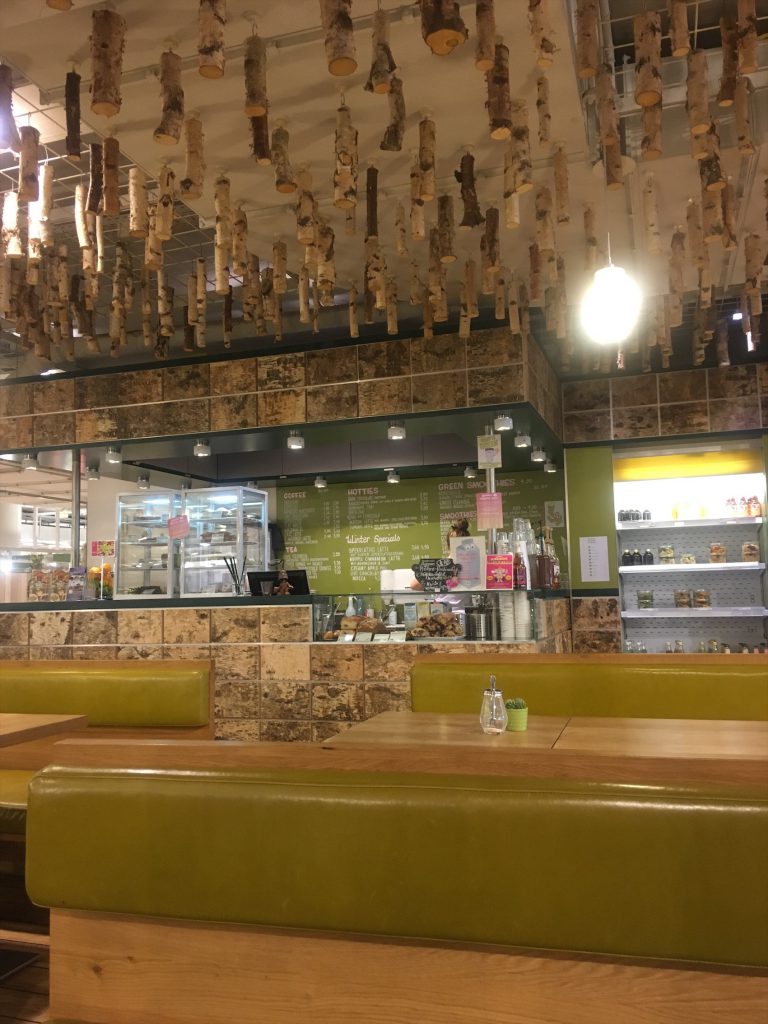 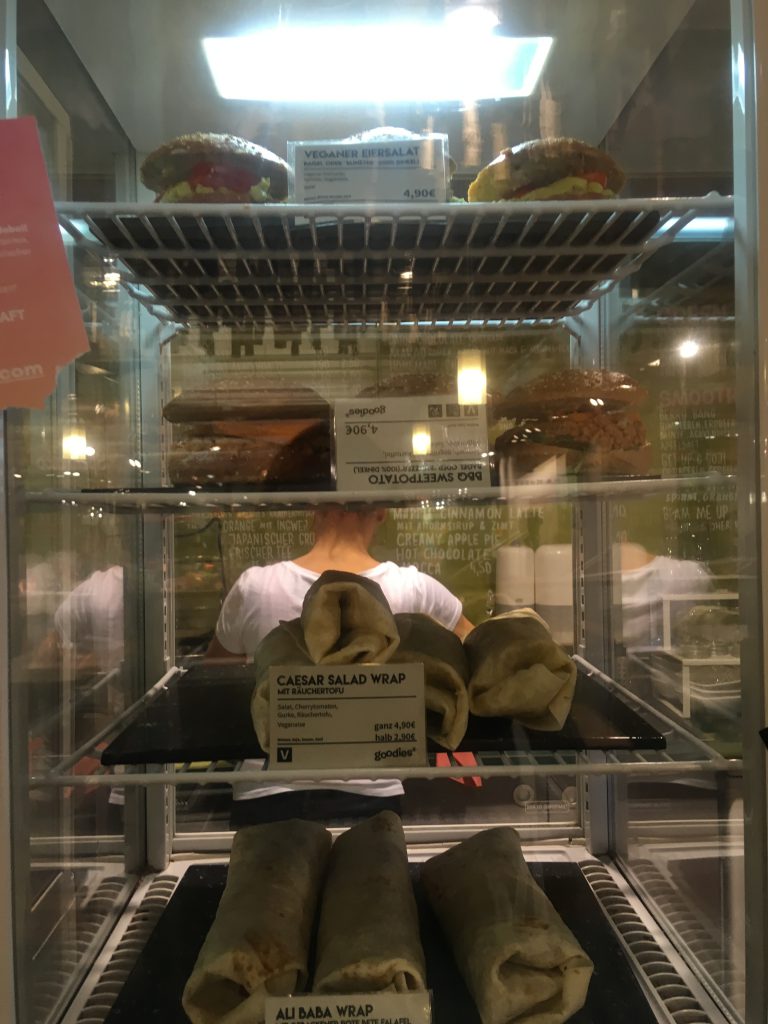 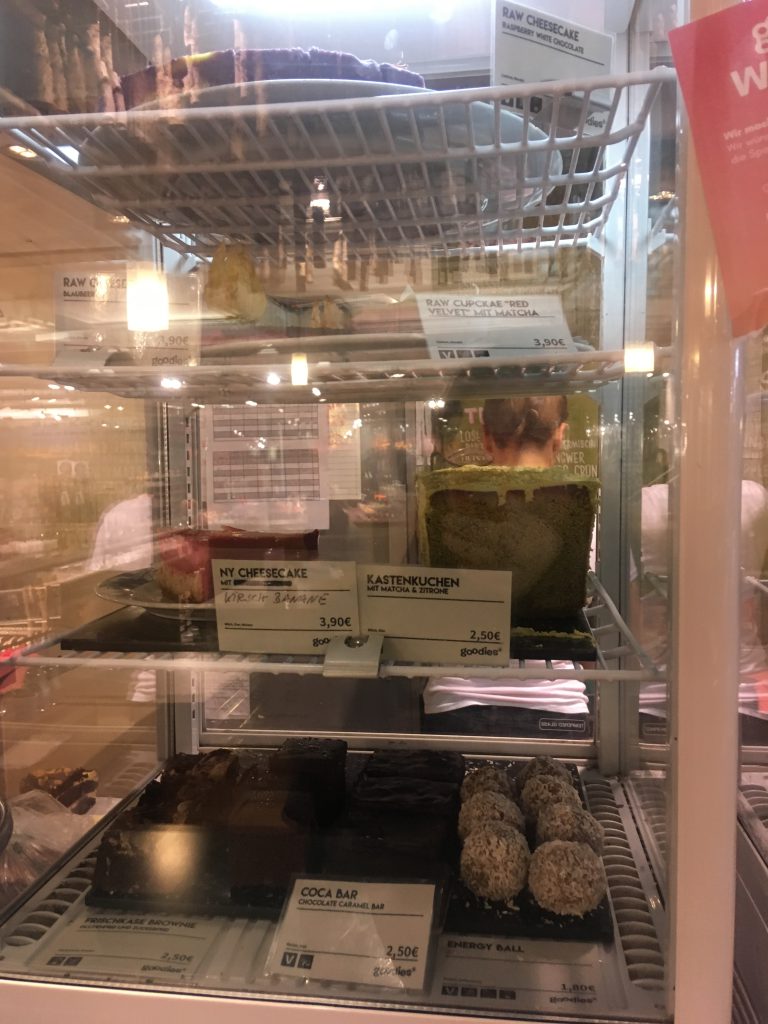 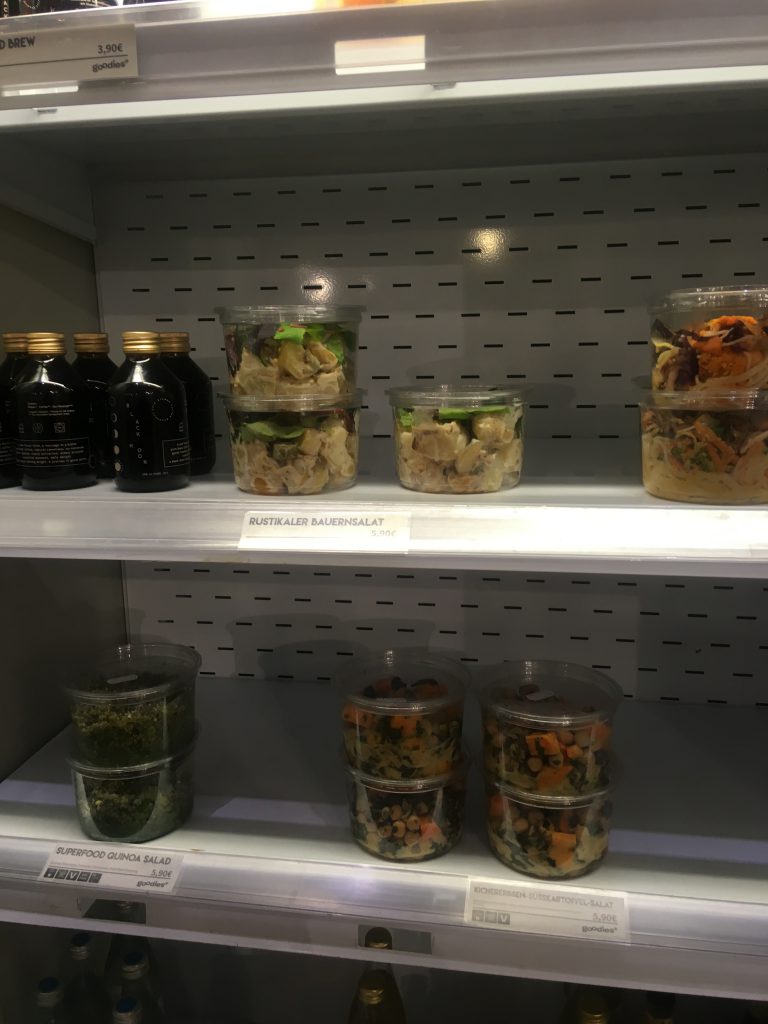 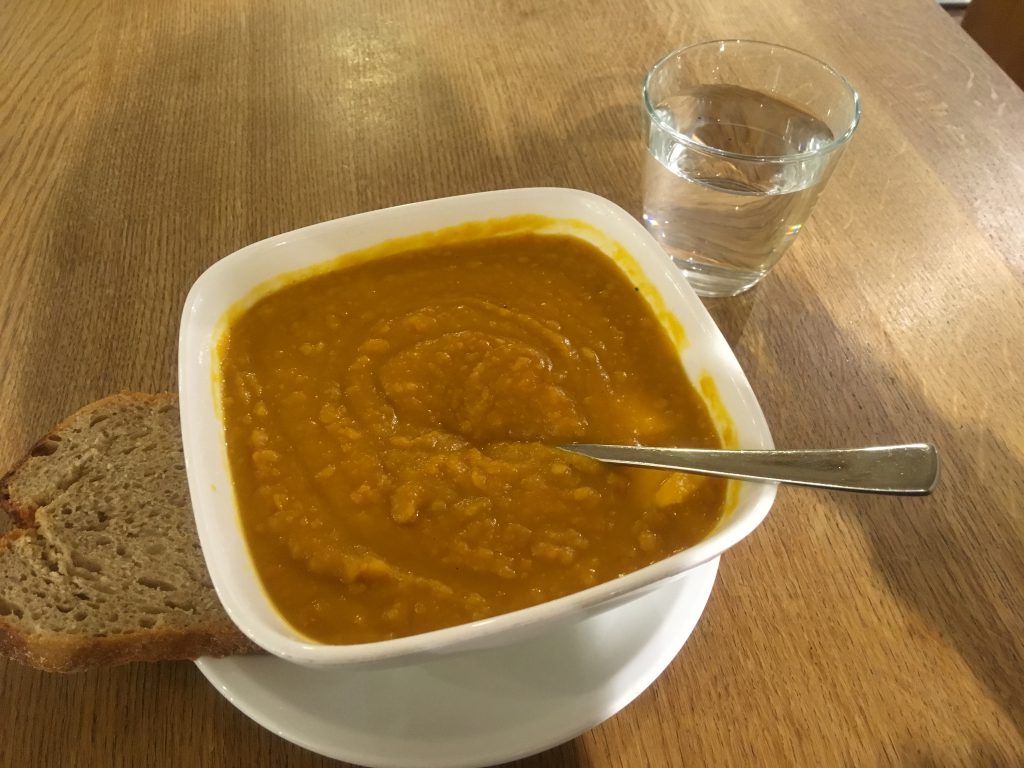